Larry Bartels found a fascinating American distinction: whereas support for government spending cuts in other affluent democracies is modest but steady across incomes, it’s class-dependent in America. Which is to say, rich people support cutting gummiment spending a whole lot more than poor people. Here, have a graph: 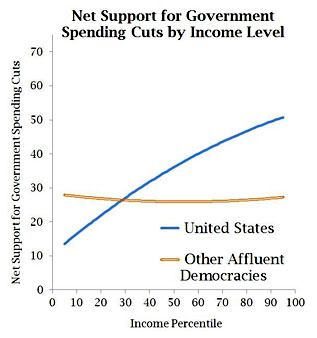 Bartels thinks this is due to a combo of the entanglement of class and race — government spending goes to “those people,” as a certain Nevada rancher informed us this past Wednesday — and the fact that the federal generosity that waters the upper class flows through back channels like wink-wink tax deductions rather than visible ones like food stamps.

But that’s a binary view that sees only rich and poor. Shrinking though it is, the middle class still exists. Kevin Drum fills in the gap:

The opinions of the rich are what drive public policy in America. Add in longstanding grievances against providing benefits to people with darker skins, and you’ve got a big chunk of the middle class on your side too.

Bingo. The rich drive public policy because the group caught between the rich and the poor ape the former to distinguish themselves from the latter. You might call this Yacht Politics. Or, to quote Rousseau via Corey Robin, “Citizens only allow themselves to be oppressed to the degree that they are carried away by blind ambition.” That’s the austerity vote in a nutshell.